Back to the blog

The traditions of pottery in Georgia go back to the hoary past. Unusual variety of winemaking equipment and wine vessels of ancient times attest to the high skill of Georgian craftsmen. Georgian museums have on display numerous clay vessels of all designations. The most impressive among these is kvevri, giant clay vessels in which wine was fermented and stored. Others, such as chapi, kula, khelada, azarfesha, doki, sura, chinchila, deda-khelada, marania communication vessels of different shapes, dzhami, tasi, pialawere used for serving and drinking. The first examples of earthenware belong to the Neolithic period (7th millennium BC). These are mostly handmade, low temperature fires of pinkish or gray color, simple in shape, which feature engraved geometric ornaments and molded knobs. Similarly to Neolithic earthenware, the pottery dating back to Chalcolithic era (4th-5th millennium BC) is handmade, however new shapes such as bowls and handled jars emerge. The production of pottery advanced further during Early Bronze Age (3rd Millennium BC), when Mtkvari-Araxian Culture (c. 3500 - 2400 BC) emerged on the territory of the East Caucasus. This period marks the creation of a new type of pottery, namely of the black-smoked ceramics. Handmade (without wheel) black and gray artifacts, varied in forms and rich in relief molded ornaments: spirals, birds and other thematic compositions, speak to the high level of craftsmanship of old masters. The pottery of middle Bronze Age (3rd - 1st half of 2nd millennium BC), unearthed in great Kurgans on the territory of Georgia are of high artistic value. Giant vessels: pithoiand hydriai are decorated with projecting ornaments. There are examples of painted ceramics, where the drawing is applied using brown or black paint on the dark red surface. The pottery of late Bronze Age (15th-7th c) is made already using potter’s wheel. It is predominantly characterized by black or gray color and geometric ornaments. In Colchis (western Georgia) the vessels were adorned with zoomorphic handles, whereas in eastern Georgia the earthenware shows the unusual variety of shapes and zoomorphic motives. Here, in 2nd millennium BC the first examples of glazed ceramics emerge. The pottery dating back to Antiquity such as giant Colchis pithoi are adorned with horizontal lines and vertical relief bands. The smoked ceramic artifacts feature the same zoomorphic motives of contemporaneous bronze artifacts. Western Georgian pottery is marked by the significant influence of Greek pottery traditions, whereas the ceramics of Eastern Georgia maintains the red decoration and the natural color of clay. The widespread shape is one handled jug with trefoil pouring spout, giant painted pithoi, where different hunting and battle scenes are depicted between the ornamental bands. 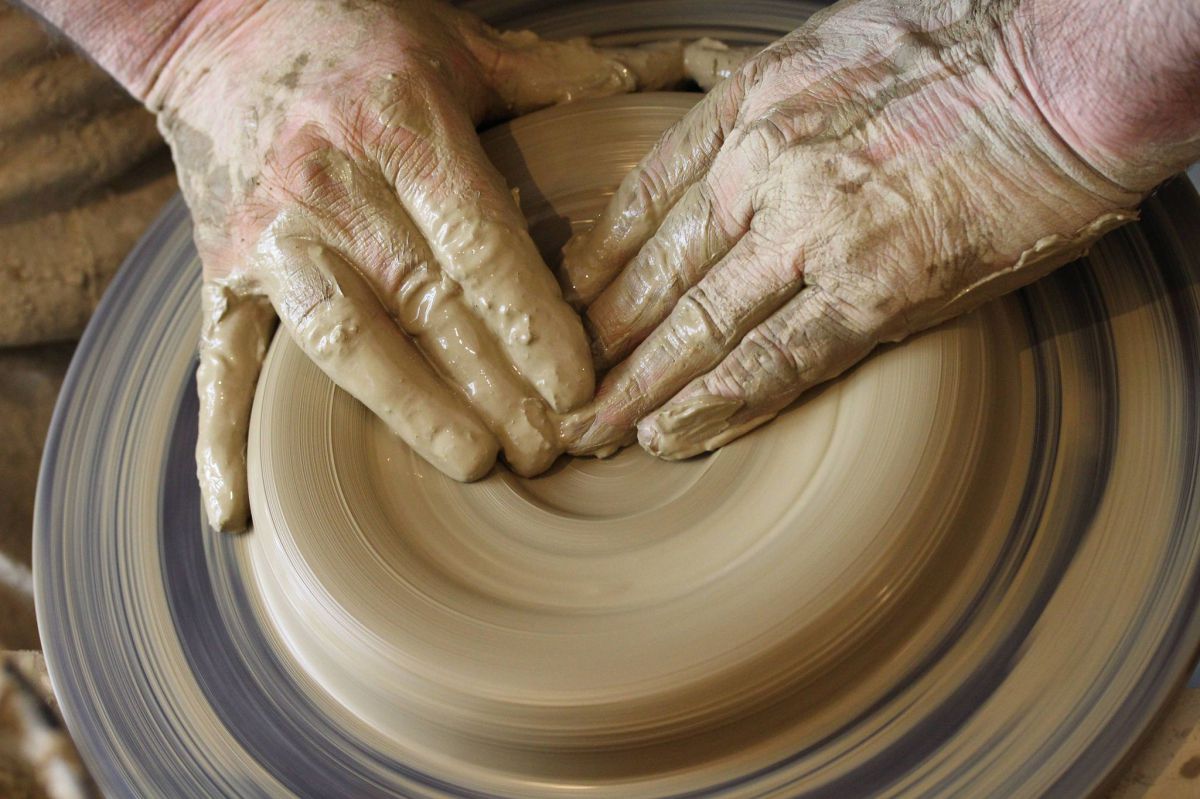 The medieval pottery production in Georgia is characterized by diversity of shapes and glazed ceramics. Here, we often find ornamental patters incorporating animal, bird and figural images. The 9th-10th century ceramics are mostly represented by entirely glazed bowls with engraved or painted floral ornaments. The 11th-13th century artifacts are more varied in shapes (bowls, lamps and jugs) with blue, green or light purple glazing covering the inner part of the vessels, featuring crosses, geometric or floral ornaments and zoomorphic and anthropomorphic images. The main hubs of pottery across the country were located in Tbilisi, Dmanisi, Rustavi, Ikalto, Kaspi and Gudarekhi. Medieval Georgian pottery reveals many similarities with the ceramic production of other Caucasian countries and Near East. Mongol invasions in late 13th century hindered the production of pottery, which has been revitalized only in the 18th century. The latter was predominantly painted. In the 19th-early 20th century the folk ceramic, both glazed and unglazed, achieved further advancement. Up to 50 different centers of pottery acted across the country, amongst these; Bodbiskhevi, Machkhaani, Telavi, Vardisubani, Ruispiri, Kakabeti, Tbilisi, Mtskheta, Gori, Shrosha, Dablagomi, Sairme, Tsalenjikha, Nagomari and others. Amongst these, the traditional ceramic from Gori covered with yellow glaze and green paint ornaments or whitish lilac combined with green glaze, is worth of special mentioning. Centers of unglazed ceramics were located in Kakheti (Telavi) and in western Georgia in Shrosha. In Tbilisi several ceramic factories were producing tableware. The high level of craftsmanship, artistic value and richness of decoration were particular for the pottery of this period. The traditions of 19th century pottery were largely maintained for the beginning of the 20th century. Establishment of studio of ceramics and glass in Tbilisi State Academy of arts in 1959 enhanced advancement of the professional school of ceramics in Georgia. Throughout 20th century ceramic production were still maintained in Shrosha, Ikalto, and also Mtskheta and Zugdidi, where the factories of ceramics and porcelain were functioning, employing number of skillful master ceramist in their premises.